Turning Nothing to Something ……

Truthfully, the day the return travelers have perhaps dreaded the most.
It’s mud huts totally, no bathroom, no running water, no building (or so I thought), basically just the land that leads to the River Nile.  And a lot of people.  A WHOLE lot of people.

I want to be very, very clear.

Preparing to go to Pakwach this morning Eryn and I were commenting to one another, this is the place where there is “nothing.”  Absolutely nothing. No building. No electricity. No well (they walk two miles to the Nile to get water twice a day). No mosquito nets. No furniture. No beds. No pillows. Most of the time it is the mud on the floor, no blankets, no nothing.  NOTHING.

As we got off the bus earlier than anticipated because our weight caused it to not clear the “small ditch” at the entrance to the village, I had the chance to walk with Geoffrey and hear how the village has changed since our time here two years ago. 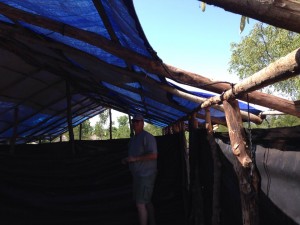 Apparently this was the “Pakwach Campus” of Acres of Hope. We knew there were children sponsored from the village that attended school at Acres of Hope but little did we know that the people had a dream and vision and they turned their vision into reality.

The people of the village approached Geoffrey and asked if they built a temporary structure would he be willing to get them teachers there on site so that the children could go to school with Acres of Hope. He told them yes, that would be a reality; but he did so thinking it would be a year or so before it actually happened.   It was three weeks. The structure was in place and it met governmental standards for a “temporary structure” so Geoffrey began procuring three teachers.  Three great teachers.  It has changed the whole nature and peace that exists among the people there.

There was no chaos. Really, in hearing the recaps of the day, there was just a lot of “touch.” And the touch turned nothing into a whole lot of something. 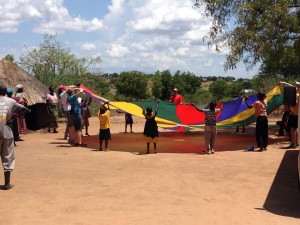 For 6 hours folks from the team jumped up and down with the giant parachute. They colored with the children and distributed crayons that were valued as if they were covered in gold. They made bead crosses or necklaces with the residents of the village.  And it was “Africa Hot” as Becky Bynum would say!

Yet there were no complaints. There was no hesitation when people “swapped tasks” and the ones who had been profiling the children were asked to go play with the parachute or stand in the sweltering sun for hours.

But despite the amazing team spirit and humility, the most impactful moments came in the power of touch. That’s when we realized that “nothing” was more than nothing. It was actually a whole lot of something!

Every time a child was interviewed so his/her information could be prepared for a sponsor the interview would end with a prayer. I had the privilege of sitting in on a few of the interviews Jim Gray led and the power of his prayers for the children were transforming.

I think I was in shock as I watched a little girl, probably about 10, answer the questions. 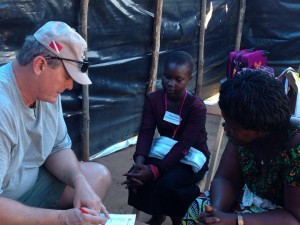 When she answered the question “Who do you live with” the answer was her grandmother. She went on to share both her parents were dead.  They both died of AIDS. She had recounted their names and occupation without pause so we all just assumed they were alive and well. Little did we know that her next answer would change everything.

I sat there, honestly frozen in time. This beautiful little girl with the biggest joy-filled brown eyes has two parents who died of AIDS. Not knowing when they contracted the disease, I couldn’t help but wonder, “Is she ok? Does she have HIV or AIDS as well? What if she is dying and doesn’t know it? Can anything be done to give her hope?”

I don’t remember the rest of Jim’s conversation with her because my mind was lost in thought.
What I do remember, however, is that someone from West had asked me to pick out a child for her family to sponsor and I knew this was the one.

I jolted back to reality as we all grabbed hands in a circle to pray.  Joy, Geoffrey’s wife who was so graciously interpreting for us, Jim, the little girl, and myself held onto one another as Jim shared the words, “And God help her, give her what she needs to fulfill her hopes and dreams, whatever they may be.”

Her hopes and dreams?  To become a doctor or a lawyer, she isn’t exactly sure which.
Her prayer request? To be able to do well in school so that she can pass the test for the higher level of education and then go to college. And for food.

She smiled shyly as she walked away. I prayed earnestly because my heart ached – – – that God would indeed continue to hold her in God’s power and grace so she could live out her hopes and her dreams. In America we have ways to test for things like worms, malaria, typhoid, and HIV/AIDS. While they have tests here, they certainly are not available in Pakwach and even if they did, there’s “nothing” there to bring medical healing unless a child is sponsored, then they receive medical care.

The day ended with our heading to the bus.  Becky was going to take care of an infection on one little girl’s leg by washing it out with some peroxide and bandaging it so the flies would stay away.

We sat on the bus for awhile, not complaining, just knowing that Becky would come when she became free.

Tonight it was shared that one infection turned into three. They were simple wounds, really. A scrape that had become seriously infected because they have nothing. There is no clean water. No band-aids. No Neosporin. Nothing.

Becky shared that she saw God today as Cooper, Aubry, Andrew, and Layne jumped in immediately to help the children. They showed no hesitation, even though the injuries/wounds were enough to turn the strongest of stomachs. It was a reminder of Jesus. The one who was willing to reach out and touch the people no one else would.

The lepers no one would touch – he not only touched but reached out to touch them. He approached all people, he didn’t merely wait for folks to come to him.

After Becky shared that was her encounter with God today through those teenagers Eryn shared her transforming moment.

She was spending time with the women and learning their story.
After almost an hour of hearing how they walk miles to get water, then work in the garden all day under the hot sun (walking miles to get there), no lunch – they save that for the children – and then one more trip for water in the afternoon, she said she finally had to ask . . .

“What gives you hope?”

The answer was “Jesus.”

Very plain and simple.  Jesus.  The one who loved the people considered to be “the nothings” and changed them into having everything.

Because they do not see themselves as having nothing. In God, through Christ, they find all things.

Those touches turn nothing into something.

Thanks be to God.