This week there has been an abundance of conversations surrounding the Confederate Flag.
If I were a history scholar I could give a lot more insight on the issue. However my background is one with more of a spiritual bent.

In fact, in regard to the Confederate Flag, I see both sides of the issue.
It is a symbol; one that has existed for over one hundred and fifty five years.

It is a symbol that has been bastardized to represent prejudice, racism, and injustice.

But it did not start out that way.
Yet today – that is the harsh reality, whether we like it or not.

Over the years it has become affiliated with hate marches, groups taking a stand against people because of their skin color, people clad in white pointed hoods while they destroy homes of African Americans, young men killing 9 people while they are in a bible study, and a way of life that perpetuated the fairer skin population maintaining control.

This is unfortunate but true.

Jesus, in his sermon on the mountainside, taught that in order to be at one with God we must learn to look at things from other people’s perspectives. We must see with their eyes. We must try to think about the situation from their experience.

It is then that we are totally denying ourselves (which Jesus was a master of doing) and it is when we totally deny ourselves that we fully are at one in Divine Love/God.

Jesus was a master of emotion.

We, however, are not.
We see things and react.
We hear things and respond, often times without looking at all perspectives.
We act without fully thinking through the most desired or best response.
Then we end up having to pick up the pieces.

Today, as a nation, we are picking up pieces in places like New York City, Baltimore, Ferguson, and many more, but most recently Charleston.

Please entertain a personal story for a second.

One of the most vivid memories I have of my mama before her death was of a green polyester “dress-suit” she made me wear for second grade picture day.
It had a jacket and a shirt with a turtleneck collar. The shirt had lace around the top.

It was the most horrid thing I’ve ever put on my body.
The neck did not fit. It scratched and I looked so silly.

Yet she made me wear it. I grabbed at the collar, even tried to rip it in the dressing room before I walked out to have my picture made. It was a bad day for my seven-year old self. Since then I’ve had an aversion to collars that are tight around my neck. 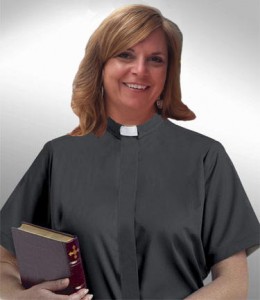 How would you feel if I were a clergy collar wearin’ pastor?

Would that help you feel at ease about introducing me to your un-churched friends? People who do not yet have a relationship with Christ?

Would you feel as if I embodied everything that you believed in about “church” if I were to don the collar and that were my “outfit” each and every day?

Chances are the answer is “no” to my wearing a clergy collar.
Most likely that is not a deal breaker for you in your faith journey.

Yet, for thousands of people in this world, that is a significant symbol. It is a symbol that bears a lot of meaning for people in regard to their faith.

While I am not going to be wearing one anytime soon, because at West we try to be non-threatening, I am also not arrogant enough to say I will never put one on. (I just hope it is a long, long, long, long time from now).

If I were in a culture where a clergy collar would change how they viewed women leaders in faith, I would put it on immediately. I might tug on it in the bathroom but in the public eye I would suck it up and do what was needed in order to help other people experience Christ.

All “religious” symbols should be that; something that points us to Jesus rather than points us away. Right now – like it or not – the Confederate Flag is a symbol that points away, rather than to, Christianity and faith.

A colleague of mine that I had the privilege of going to the Holy Land with in 2014 puts it this way. Kevin states, “Somehow we have forgotten that there is a cost to following Jesus. That if we are to be a disciple of Jesus then there is a lot we must give up – yes, even things we like. We have been renewed to live for Christ, and can no longer live simply for ourselves.

This means that we have been called to give up our own history, our own present, and even our own future in order to allow God to help make us, and our world, better for all people and all of creation.”

As we continue to be in prayer for all the Charleston people and families, I would invite us to explore our own symbols of faith.

At West we try to have very few symbols. The cross on the stage is simple and open . . . the rubber chicken is a symbol that ALL are welcome, regardless of how bizarre one can feel or be.

Yet each of us has symbols in our lives. I would invite us to explore those symbols. Today.