There are HUGE steps forward as humanity shows kindness and love.

Then there is “ick.” Go figure.

On Thursday, August 21 at a Starbucks in Florida, 379 people participated in a Pay-it- Forward. It began at 7am with a lady paying for the next person in line’s coffee.  This continued all day until one lady at the end of the day refused.

She wanted to pay for her own. The cashier stated she most likely did not understand the concept of “Pay It Forward.”

Which brings me to my question.

Why do we have to take good things that massive amounts of people are doing and turn them to bad?

Or why do we take huge acts of kindness and use them as a catalyst for rants against consumerism? Is that the way to make a positive impact with others? Somehow I just don’t think so . . .

If we have to do that – maybe the problem isn’t the people who are doing the acts of kindness.  Maybe, the problem lies within us.

By August 22, 2014 over $44 MILLION dollars was raised to fight the neurodegenerative disorder (ALS). During the same period last year, from July 29 to August 21, 2013, the organization raised only $2.1 million.

Everyone from city government organizations, large corporations like Discovery, celebrities and political leaders, and people of ALL ages, from ALL places are doing the ICE Bucket Challenge.  And raising money to research cures for a tragic disease.

“I’m all for raising money for ALS BUT what about the other diseases? We need to raise money for ______________.” Then there is a bit of a diatribe about how “we” should be doing more and the focus on ALS is just too much.

Maybe there is a different way of looking at these things. Rather than fuss about what is NOT done or how it is NOT enough . . . maybe we celebrate????

How cool is it that HUMANITY . . . not a church, not a denomination, not even an institution or organization  . . . but HUMANITY  – in the MASSES – are participating in things that involve focus on others rather than self. Folks are focusing on making a difference. Even if it is in the spirit of fun or dumping ice/fresh water . . . throngs of people are joining together and paying it forward in many, many ways.

Rather than viewing it as a bad thing, rather than seeing it as too much of a focus on one disease and not enough on another, what if we look at it as an opportunity?

What if we celebrate what is and then continue forward – taking one step at a time – to see what can be? Happily.

Maybe that is what Jesus did? Instead of berating the people who followed him because their very human actions were never quite enough, he celebrated when they took steps forward … even if they were tiny ones … and corrected them when they missed the point. 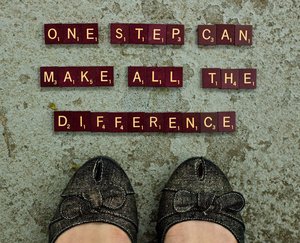 I’d say that an increase of over $40 million dollars in one year for research for a disease is significantly more than a tiny step forward.

ALL DAY of paying it forward at a Starbucks in Florida is another HUGE step forward.

If these “steps” continue and multiply, just think of what the world will look like.  And isn’t that the point? Bringing about a change in the world . . .  acting out of love, for all people, for any people, regardless of their socio-economic status, gender, sexual orientation, or race?

As I see others taking those steps, I’m going to celebrate their actions.  For, those are the steps I hope to take as well.

“Let no evil talk come out of your mouth, but only what is useful for building up, as there is need, that your words may give grace to those who hear.” (Ephesians 4:29)