Apparently I don’t function well on no sleep for 36 hours . . .  (had a little problem sleeping our first night here) so the blog I TRIED to write was just bizarre.  I decided NO ONE needs to hear what I have to say when I have not slept for 1 ½ days!

Truly it was “clash of the kingdoms.” 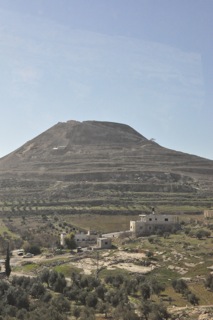 The day began when we went to Herodium – the MANMADE mountain and palace ruins that Herod had built.  From the top of the mountain you could see the Hebron Valley where Abraham resided, the city of Jerusalem, and Bethlehem . . . all at once.

That was intentional on Herod’s part. (Herod was the king who killed his wives, his sons, then had all the 2 year old male babies killed because he was so threatened by the news of this “new king that had been born in Bethlehem.”

He wanted EVERYONE to be able to see his power, his control, his kingdom. So . . . think about it – ALL of the “major places” of importance in the time period would look up in the distance and see this palace built by a man who called himself “King of the Jews.”  Yet was never that in truth – merely a Roman ruler.

A few years ago during excavations they found the tomb of Herod.  They recovered the cataclophagus (thing that held his bones).  They believe it was his as it contained the symbol of his kingdom . . .  and you know what?  His ego was SO big and his desire for his kingdom to have no end was so prevalent – his tomb was found on the side of the mountain that faced all three cities.  Even in death he wanted to rule the people.

Then we traveled to the shepherd’s fields.  Even met a real life shepherd.  That was accidental and also very cool!

What a STARK contrast . . . the cave you will see in the pics is much like a cave that Mary and Joseph would have been in when Jesus was born.  It was cold. The ground was hard. It was dark . . . .yet that was where the man whose life and legacy changed the world and still keeps changing it .. . .  that was where his kingdom began. 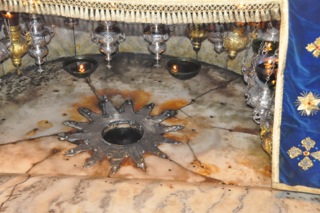 It was so ornate . . .beautiful 4th century building w/ the original mosaic floors in place, etc.   Going down to the spot where the cave would have been was powerful just because of the way the things were done . . .you get in a line – you wait . . then you arrive and there is a star on the ground w/ candles, etc.  We had the rare opportunity, apparently, to stumble upon the place at just the right time for a moving worship experience. The Greek Orthodox Church was there having their worship service and the priests were taking care of the temple, much like Zechariah would have been doing when the angel appeared to him.  That was a “WOW” moment for me b/c I never really “got” what those priests did back then in the “temple.”  Our temple is an auditorium. . . so it makes it hard to relate.

Anyway – by the time I got to the star, however, it was just void of any mystical presence for me.

I knelt, reached into the recessed area and touched the star again . . . even closed my eyes . . . .

I felt like such a hypocrite.  No “mystical” presence of anything divine there . . . yet hundreds of people from all over the world were there in that space kneeling, etc. some crying, some chanting, But clearly “feeling” something.

I could not find it within me to have the “goosebump” moment that I had so thought I would have.

And not because they are some of my favorite people in the nativity story (although they are!)

While we were worshiping in that cave, one of the pastors on the trip from Andrews UMC, her name is Mary, was sharing a reflection. She commented how she had always loved the shepherds and what they stood for – that God revealed the good news of great joy for ALL people to the most lowly of lowly FIRST!  I thought, “yeah!”

But she went on to say there was another part of this story that she rarely thought about . . . but these fields were the same fields where in 1 Samuel 16 David was anointed to be king.  And what a powerful, world changing king he would be!

David was called by God. He claimed his call. And went on to do great things.

In the same place/area that the shepherds received their gift of the good news, a young boy who had no business being a king was anointed to do great things . . .

I think that is the first time in a LONG time I’ve had a peace about going before the Board of Ordained Ministry when I get home . . . We get home Thursday – I go before the board for my oral interviews on Tuesday afternoon.  I’ve had nightmares about it, cried about it, worried about it, laughed about it, and now .. .   I have a peace about it. You see – I do get that I am called by God.  I still think God has a bizarre sense of humor because the list of things I am NOT is far too long to put here . . . but if David could be a shepherd boy and go on to be a powerful king then I realized when God calls us, God anoints us.

My mentor keeps telling me that God goes before us in all things. Regardless of how the human situations and circumstances work out – God is still there and God can and will redeem all things.  Even when we screw them up!

So even if I get deferred for a year . . .although it will hurt my HUMAN pride – it doesn’t change my effectiveness in my calling . . . and I will just try again next year!  I will cry a few tears and then I will need YOU to remind me . . .  it isn’t about human titles or acts, it is about the act of being called and anointed by God. Like David.

And that story isn’t just for me!

That story is for each of us.  You, me . . .we all are called and claimed by God to do and be great . . . but it needs to be for the right things.  That’s where the whole clash of the Kingdoms comes into play.

Whose Kingdom do we live into?

We are called to live into the Kingdom of God. Where the reign of God – love . . pure, selfless love, reigns and guards our hearts.  Our actions. All that we are about.

Far too often I get sidetracked by distractions for earthly kingdoms. . . .  kingdoms of trying to look the right “look,” fit in in the right ways/places, all that human stuff.

That isn’t a kingdom that brings any good to this world.

I was reminded what amazingly beautiful things come from the Kingdom of God . . .where love for God and love of others abounds.

I desire to live into that call.  I hope you will join me in claiming your call . . .and let’s change the world together.