That was a phrase in one of the notes from home.  “May you be filled with fresh hope…”.

No doubt there is fresh hope from among the people from Mooresville here in Nebbi, Uganda.

Last night at dinner Becky Bynum asked, “So tell me Andrea, how did all this start again?”

So Eryn O’Brien, Pat Benfield, Lance Armstrong, Andrew and Layne Smith and I began to recount the day 3 years ago when we stood alongside Kathy Warner, Scott Smith, Morgan McMahon and Julie Fuquay in a circle and consecrated the land for Acres of Hope.  There was nothing there… just some architectural drawings Geoffrey had funded and had prepared knowing that God would lead the right people to his midst.

Three years ago we prayed that God would do just that – and would bless Pastor Geoffrey and Acres of Hope with the right resources so that he could fulfill the vision to provide school, healthcare and adequate food/clothes for children in need in the community.

Three years later… here we are.  Five pod houses, a temporary structure that serves as one school building, a permanent structure that right now s the other part of the school but once the official school is built it will serve as a dormitory.  Because of followers of the Way from across the United States, he also has an electric well (no pumping involved!!!) and each pod house is plumbed for running water.  Three of them also have power as they have solar panels on the rooftops and the other two are ready for those panels once they are funded.

Today as Pastor Jan Brittain, Eryn, Lance, Andrew, Layne, and Pat were able to share in the joy of Pastor Geoffrey alongside Cathryn Anderson, Aubry McMahon, Michelle and Cooper Campbell, Jeannine Dubriel and Becky Bynum we saw how God is always at work.

Throughout time and space the mystical presence of the divine Creator works in and through each of us so that connections are made, dreams are dreamed, visions created, and ultimately fulfilled.

I will never forget the phone call from Rev. Rob Fuquay on Easter afternoon in 2011 and his words, “Well, I’m either crazy and you’re going to think I’ve lost my mind or you are going to be elated with what I’ve done but today in the benediction I had an idea and…”

That IDEA was to challenge the people of Williamson’s Chapel and the community who were worshiping at WC on Easter to use some of the money they had planned on using toe buy a new boat or do something extravagant for themselves and instead use it to build a pod house for Acres of Hope orphanage.  By the time the day was over he had two phone calls.  I received one the next day and another later that week.  All in all – five families stepped up and made significant contributions towards the building of the pod homes to begin what is now a complete Phase One of Acres of Hope.  It truly, truly is amazing.

Two years ago another team ventured to Nebbi.  This time Joe and Sam Freeman, Michelle Campbell, Rebecca Appleton, Alec, Carly and Kendall Castillo, Terry Blythe along with several other repeat team members plus Sam Coleman from World of God non-profit that is connected with Myers Park UMC traveled here to begin talking about the structure and function of child sponsorships so that the kids could be funded to go to school (there is no free public schooling in the nation of Uganda).  After many business conversations with Pastor Geoffrey and Kathy W. and myself, the covenant was made to begin partnering together with World of God… and child sponsorships began.

Now – thanks to SOOOO many, Hope Circle, Circle 3 and Grace Circle from WCUMC, Wired from West, and many individual sponsors both from Mooresville and across the USA sponsor 50 children and the school is alive and well with hope! Fresh Hope!

Tonight at dinner as we sat amidst a brief power outage we took the opportunity to share where and how we saw/experienced God at work in and among us today.

Jim Gray shared that as a little boy came up and grabbed his hand as soon as he got off the bus, he saw God in that little boy.

Jeannine shared that she saw God in Aubry as Aubry captured the images of the children with her technology. For hours on end Aubry took pictures, showed the children their pictures, and then sat and played until it was time to head back to the hotel. While Aubry was completely content and at peace, she was so immersed in the children, at times we wondered if she was ok in the middle of the group since we could no longer see her. She always was.

Lance shared how he saw God among the team members… no one complained, no one sat idle, everyone just became part of the Acres of Hope Community.

As Jan shared later, part of a mission trip is how God uses it to create space in each of us for us to grow closer in our journey with God.  That was truly felt today as we worked/talked/played alongside the young people of Uganda.

Whether the God moments were seen by some remaining inside coloring pictures for the children who just could not handle “massive” activity or in moments with bubbles, the connection with God was felt as people shared their experiences from today.

Bubbles? Eryn saw God in bubbles. As the children ran after and ultimately popped the bubbles, it was hard not to feel the contagious laughter and joy. Giddiness is a mild term – all because of bubbles. Something so simple… yet here – so big.

Cathryn saw God in the smiles of the people here… no one was ever unhappy and all greet one another with a smile. Always.  She remarked how at home, rarely do we simply just smile at one another.  What a simple act of God (act of Love) that could be to merely offer a smile!!! 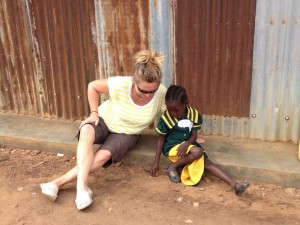 My afternoon was a blessing.  Literally – a blessing because of a 5 year old little girl named Blessing.

Either I am having slight caffeine withdrawls or I might still be recuperating from a crazy past few weeks but after lunch I just could not bring myself to go jump up and down witht he massive parachute.  As I wondered what I would do with the next three or four hours a tiny little hand grabbed my finger.  Blessing was her name…. she didn’t speak but we walked around for a few minutes and we ended up sitting on the step outside the school.  We (actually – I) talked for a bit and then we just sat.  After a few minutes she found a rusty nail and began writing in the dirt.  I thought, “Ah, now something we can do together.”   So we began writing and drawing things and giving them a name.  We ended up practicing her name – in the dirt.  We could write and then she would wipe it away and we would start again.  This went on for 30 minutes and after awhile I grew a little tired of dirt writing.

“Wouldn’t it be more fun to color? Draw a picture? What if we practiced her name on paper?  Surely that would be so much more effective.”  I consluded I needed to go back to the pod home to get some crayons, etc. but for some reason I found I couldn’t bring myself to leave the moment.

It only took a few more minutes for me to understand and hear the message God was clearly trying to speak.

“Be here.  Be in the moment. Sometimes it is in those moments that we are seeking and looking for something “different” or something SO much more that we actually miss the biggest blessing that exists.”

She didn’t need crayons. She didn’t need paper. She had all that she needed.  Why would I complicate things when clearly she was at peace with what she had?

I think often times in life that is how we live.  Or I do, anyway.  We are the ones that complicate things.

God is omnipresent. Always at work in us, nudging, speaking to us in the moment, providing us with all that we need and giving us more than enough to carry us forward in our journey.  Yet we miss it.  We are distracted, needing more, not earnestly looking or hearing, or too bruised and wounded to allow ourselves to feel the joy that comes with each momentthat is truly “in” God. We miss the blessing.

Maybe if we each take a few moments to be intentional about being IN the moment, maybe then we can always find the Blessing in our own lives. It is a lesson I hope I do not soon forget.