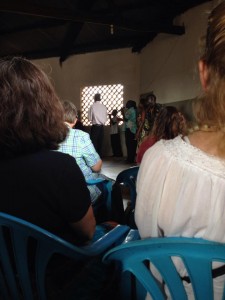 Two little boys had on a suit and tie.
Several girls had on dresses with flowing chiffon skirts.
It didn’t matter if they were stained a bit, or perhaps a little too big (or small), or torn in a place or two . . . there was no doubt – it was their best. And they were pleased to be church.

Note – not “in church” but “be church” this morning.

For the past 11 years at Williamson’s Chapel and it was that dna strand that formed the foundation of West, part of the mantra has been that we do not “go” to church we are called to “be” the church.  Be church.  For one another.

When we first arrived I met a girl who appeared to be in her early teens.  She was polite, shook hands, curtsied when I said hello, but there was a deep sadness in her eyes.  Or I thought so anyway.  She would not smile.

No matter what I did, how I tried to engage, there was no smile.  The other kids would often be shy at first, but then would open up and play around.  Blessing sure came out of her shell after the first day . . . .but this young lady, there was just something about her that conveyed sadness. And it weighed on my heart.

In thinking perhaps she could be someone that my family could sponsor, I inquired about her story with Michelle.  Michelle shared with me that she was relatively certain this young teenage girl had recently given birth. I was shocked as she looked like she was merely 13 – 14.  How could she have a baby when she, herself, was so young? Michelle told me perhaps she had misunderstood and we would check with Geoffrey.

Today we asked Geoffrey about her story.

She did, in fact, give birth to a baby recently.
She was raped by an uncle.
In a very complicated story that I will not retell correctly, the bottom line is that because it was a family member, some wanted him to suffer punishment because of the rape but some other family members did not.  Somehow a “cow” (yes, a real cow) became involved as payment to her for the crime, then the cow was stolen, and now there are people in her family and in the village that want her killed because she cannot give payment in replacement for the cow.

I do not understand – so please don’t try.
I’m not telling you this story so that you will try to understand it. There is no understanding without truly being immersed in the culture and context; which none of us from America are.

Immediately after hearing this story I had an email from my mentor . . .  “I’ve been reading your blogs. I want to know more about the child sponsorships there . . .”  I replied immediately – I have just the young girl for you.  She needs you . . .  she needs hope.

But then as I reflected this evening as we ate dinner with Geoffrey and his wife Joy, and several of the children who live with them until sponsors can be found, I realized – it isn’t just Geoffrey and Joy that care for these children.  Even though there are family situations and tribal customs we/I do not understand, there are also people who are “church.”  Because of a faith in something bigger than they are – a divine, powerful, loving God – they give of what they do not have and care for one another. They live out a resurrection faith, knowing that new life comes from divine love.  They offer that love to one another .  . . not counting the cost for themselves but rather in giving all that they have to see that others have life.

Isn’t that the way of Jesus?  Showing us that sacrificial living, living not for self but with and in God leads us to true life . . . that’s really what “church” is.

We are called to “be” church.

I’ve had the privilege of walking alongside 13 others this week in conjunction with a ton of people affiliated with Acres of Hope and also West and Williamson’s Chapel in the USA that “get” being church.

I guess that is ultimately where “hope” comes from.  One another – showing and giving and living out being Christ for all people.  Whether they are in Mooresville, Third Creek, Winston-Salem, Jamaica, Uganda,

Hope here comes in many ways, shapes, and forms.
Church isn’t a building. Nor is it a “congregation” of people . . . an “institution.”

Church is people anytime, anywhere living out their love of and in God with one another.

We start the literal 36 hour journey home tomorrow.  My heart is full and there is certainly no more “Easter hangover.”

The only “over-age” is that I got an answer to my question . . “What if both parents die of AIDS? Do you know if the children have it and if they do, do they receive treatment?”

The answer is one that brings much joy.  And also much Hope.

Acres of Hope is monitored by the government for accountability, etc. In Uganda, any orphanage must have reports and accountability to the government so That corruption and greed do not come into play as individuals use organizations for personal wealth and status.  Geoffrey has strict guidelines he has to follow and both he and we believe that is a good thing.

He shared with me today that the government gave approval for all children at Acres of Hope to be tested for HIV.  If a test comes back positive, the children are given the necessary medication so their condition does not worsen.  If folks are a child sponsor and they want to know if the money they send each month makes a difference?  It saves lives.

Thanks be to God.