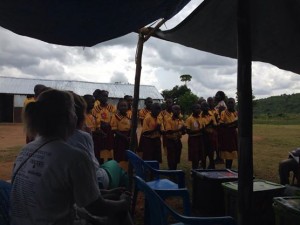 It was the end of the term.  They have three terms here in Uganda and then a three week break between each term.  So yesterday was a BIG day for the students of Acres of Hope. They were ready for the term to be over, exams were finished, and they were ready.

They were ready for their “Award’s Ceremony.”  And this is not the typical one where every child gets something – “best smile” – “best teacher’s helper” – “Most improved” – “best handwriting” . “Perfect attendance” . . .  This awards ceremony only consisted of three awards per class. For the top three performing students for that term.  Apparently this is a BIG deal for them and they compete rigorously for that award. Total of 21 kids received the top three awards: 1st, 2nd, and 3rd.

Only one young lady has held the “top” place for multiple terms. The rest change spots each term.

Do you know what they compete for? It isn’t a nice gift card. It isn’t a certificate to put in a frame or a shadow box that parents make when their kids graduate high school . . . it is for themselves. They have an intense desire to learn.

Education is not free here. In order to go to school they have to pay. And the kids that are a part of Acres of Hope do not have the money or resources to fund their education. Many are orphans or are raised by an aunt or grandmother. Geoffrey has had such a powerful vision that many of the children at Acres of Hope end up living with other families in the village and come to school (thanks to the child sponsors through World of God). Everyone here desires an education. There is no taking it for granted. And they compete.  They compete not for a prize by our (American) standards . . .

They compete for themselves because they have a passion to become doctors, nurses, pastors, lawyers, teachers, nuns, and accountants. They WANT to DO something with their lives.

The physical award they received yesterday?  We were all mesmerized.

We thought it was some kind of candy . . . it looked like “Sour Punch Straws” – a long package of bright blue color.

The only “prize” they received other than knowing they were doing their best . . . .was a long pack of soap and a container of vasoline.

I think if that were the award given at home the kids would laugh and some of the teens here said, “they’d revolt!” Who in America would care to get some soap?

That really said everything for yesterday.

We sat through a two hour awards ceremony which focused much more on the students saying thank you to the teachers, the principal, the house mothers, and the director (Pastor Geoffrey) instead of every child coming up to get a piece of paper giving them an “atta boy” or “atta girl.”  Their time was spent giving back.  Because it matters.  They know that people are pouring into them – and they say “thank you.”  They curtsie and are so gracious.  There is not a mentality of “give me” but rather – “Let me say thank you to you.”

It has changed our hearts.

I think we might be having some competition of our own on who can sponsor what child that does not have a sponsor.  We have also seen the difference that makes.

They write her and pay $50 a month for her education, clothes, food, health, lodging, etc. through World of God.

Gladys was first in her class!!!!!

That is relational missional ministry.  When we join together across the world to make sustainable, long-lasting difference in the lives of people.  Not only OUR making a difference in THEIR lives.  THEY change us!  They show us what matters.

They remind us how our using our money changes things half a world away!

They competed for soap and petroleum jelly.

Thanks be to God!